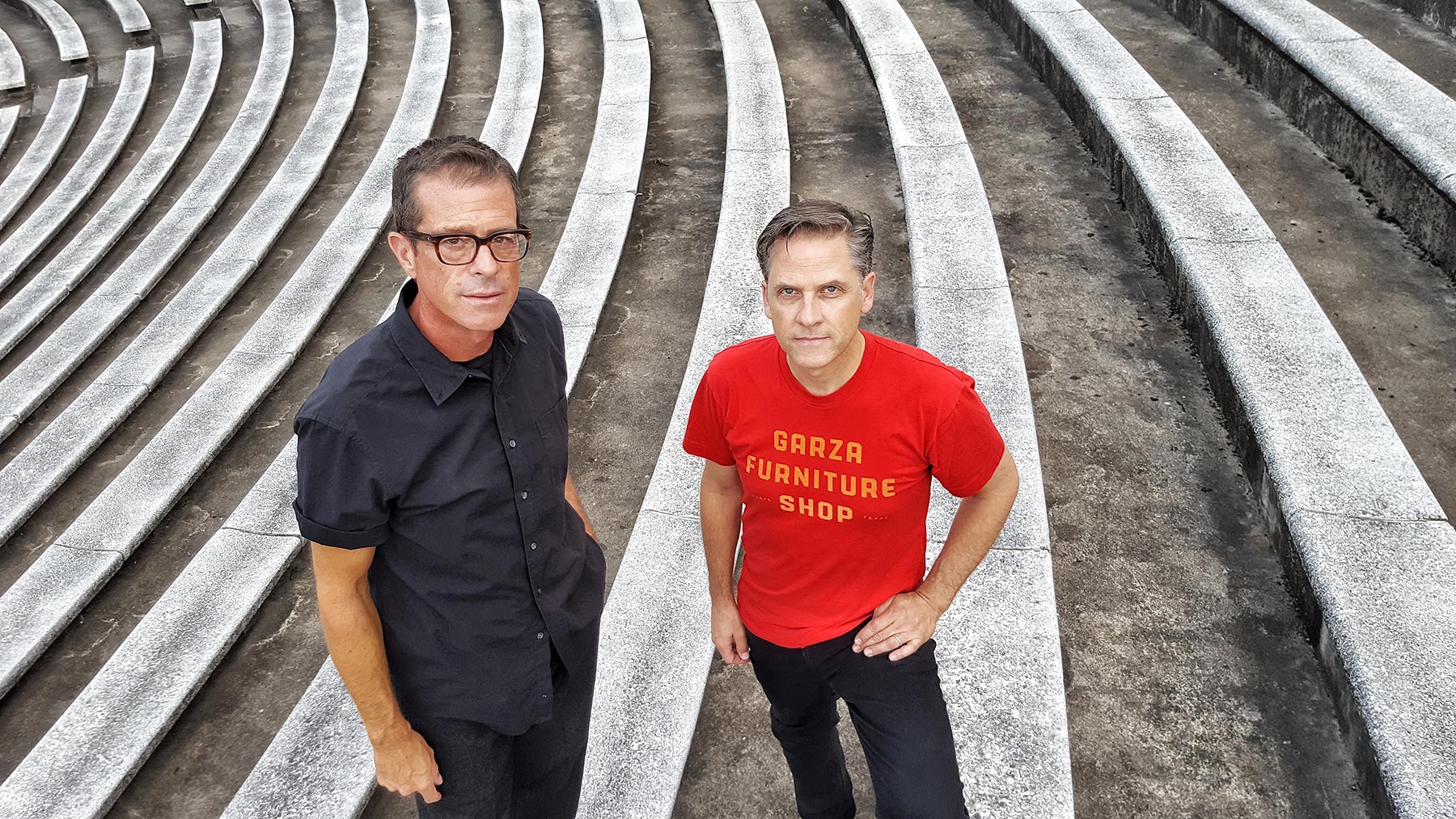 The ninth studio album from Calexico, The Thread That Keeps Us is a timely snapshot of the Arizona-bred band: a family portrait capturing their stylistic variety and unpredictability while still finding solace in limitless creativity. In bringing the album to life, vocalist/guitarist Joey Burns and drummer John Convertino found a spiritual home in unusual surroundings—not in Arizona, but on the Northern California coast in a home-turned-studio called the Panoramic House. Built from debris and shipyard-salvaged timber—and dubbed “The Phantom Ship” by the band—the grandiose house and its edge-of-the-world-like ambience soon made their way into the songs. The specter of California also had a powerful effect: as both dream state and nightmare, its infinite duality is mirrored in the music, giving Calexico a new direction and new edge. With less polish and more grit than ever before, The Thread That Keeps Us both honors enduring traditions and reveals Calexico’s confidence in songwriting, ultimately setting a whole new standard for the band.

As heard on the album’s lead single and opening track, the drama of the landscape directly impacted the making of The Thread That Keeps Us. Driven by sing-song melody and galloping rhythms, “End of the World with You” discovers an unlikely romanticism in volatile times. With its lyrics illuminating “Love in the age of the extremes,” the track is the perfect intro to an album that endlessly explores the contrast between bright and dark, hope and fear.

Working with their longtime engineer Craig Schumacher, Calexico co-produced The Thread That Keeps Us, gathering musicians from across the globe to dream up an earthy yet expansive sound spiked with jagged guitar tones and flashes of distortion. “There’s a little more chaos and noise in the mix than what we’ve done in the past,” Burns points out. Although that chaos has much to do with “where we’re at right now as a planet,” it also echoes Calexico’s dedication to constant experimentation. “Whenever we’re writing and we come up with something that feels too familiar, someone will end up saying, ‘That feels good, but let’s keep going and see what else we can uncover,’” Burns says. “It’s been really important to the arc of this band’s evolution for us to always keep on trying new things.”

Like “End of the World with You,” much of The Thread That Keeps Us captures the anxieties and unease of living in tumultuous times. But while the album draws a kinetic energy from all that uncertainty, its lyrics unfold with a literary nuance and sense of setting and character. “Instead of writing straight-up protest songs, I want to tell stories,” Burns says. Largely inspired by his wanderings around Northern California during the album’s production, the narratives embedded in The Thread That Keeps Us reflect on displacement, transitory existence, and—in Burns’s words—“returning to your home after being gone for some time and seeing how things have changed, and maybe not in the best way.”

As the exact embodiment of that theme, “Thrown to the Wild” delivers one of the most mesmerizing moments on The Thread That Keeps Us. With its gritty but poetic storytelling, the song opens on a downtown bus station late at night, its sleepy rhythms and atmospheric haze intensifying the bleakness of the scene (sample lyric: “Home’s waiting like a motherless child”). From there, “Thrown to the Wild” slips into a glorious frenzy of hummed harmonies, sprawling guitar lines, and Jacob Valenzuela’s sorrowful trumpet playing, the effect both hypnotic and jarring. “We wanted the second part of the song to just open into this sea of chaos,” says Burns, adding: “Sometimes chaos can be a good thing.”

Eclectic in sound and feeling, The Thread That Keeps Us also offers the measured fury of “Bridge to Nowhere,” the triumphant grooves of the Spanish-sung “Flores y Tamales,” the meditative rhythms and jangly guitar riffs of “Another Space.” On “The Town & Miss Lorraine,” shimmering tones and delicate mandolin melodies play against the darkly cinematic mood of the lyrics (“Sliding into the sea/With cynicism and rum/Watching Miss Lorraine/Smoking alone with the moon”). The most brutal track on The Thread That Keeps Us, “Dead in the Water” builds a thrilling menace from its snarling guitar riffs, frantic piano rhythms, and piercing lyrics penned for what Burns describes as “the antagonist to the story of the album—a kind of monster” (“Don’t try to look away or stop me in my path/I make the law and I decree a new kind of wrath”). And woven throughout The Thread That Keeps Us are a series of instrumental interludes, including the lilting folk of “Unconditional Waltz” and the dreamy psychedelia of “Spinball.” “Going into making the album, the only thing I really knew for sure was that I wanted there to be moments that felt free and spontaneous—just these moments of no time, no lyrics, no agenda,” says Burns.

One of the most stirring tracks on The Thread That Keeps Us, “Girl in the Forest” spins a gentle fable from its near despair over the state of the planet (“Well the world was spinning so fast, nobody took the time”). “That song wouldn’t have been written unless I was sitting next to my daughter Twyla, who was humming along as I was making up this melody,” says Burns. “For months we tried finishing the lyrics together; I was leading with this idea about environmentalism and protesters in the forest, and I thought there could be some sort of spirit who appears. And then my daughter told me, ‘Yeah, that’s cool—but maybe it’s just a girl who’s friends with all the animals.’”

With “Girl in the Forest,” The Thread That Keeps Us displays a sensibility that’s long informed Calexico’s songwriting: a transcendentalist infatuation with the wild beauty of nature, a fascination deepened during their time at Panoramic House. “Being up there on the mountain and taking walks on the shore, and even swimming in the cold water, we couldn’t help but be inspired by nature,” says Convertino. “Our love for our earth, our home, and the future of our children came into focus even more, giving the inspiration and desire to give back something that’s positive and beautiful and life-affirming.”

In that life-affirming spirit, Calexico decided to end The Thread That Keeps Us with a moment of fragile optimism. Described by Burns as “a love song for my kids,” the piano-laced, sweetly swaying “Music Box” speaks to preserving dreams in a troubled reality. “Right now we’re at the edge of another potential crisis unfolding, and it’s haunting every night as you put your kids to sleep,” says Burns. “But at the same time, you look into a child’s eyes and you see something hopeful, even if they’ve maybe heard little pieces of what’s going on in the news. I think that’s pretty much the case with this band: we still have hope, and we’re still so excited to be making this music together.”

This error message is only visible to WordPress admins