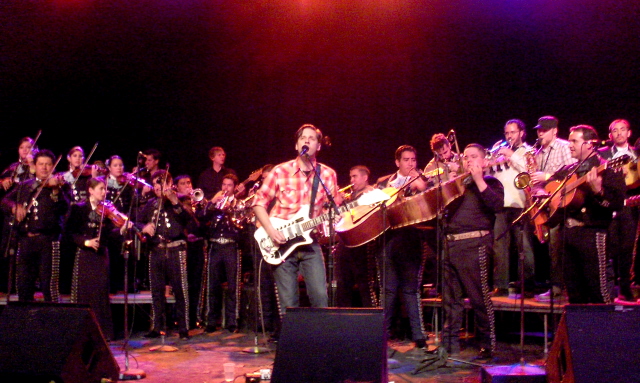 After having enjoyed the holiday vacation we all returned to Tucson for a memorial concert and benefit on January 6, 2007 for the family of mariachi musician, Ariel Cramer. I just wanted to say a special thank you to everyone that helped out in making it a truly special evening. The Cramer family were all very taken back by the number of people that came out to support the relatives and children of Ariel. Thanks to the Rialto Theatre staff and crew, Steven Eye of Solar Culture, Billions Booking and all of the musicians who donated their time and energy to making such a beautiful night of music and sentiment. This was truly a great way to start the year. 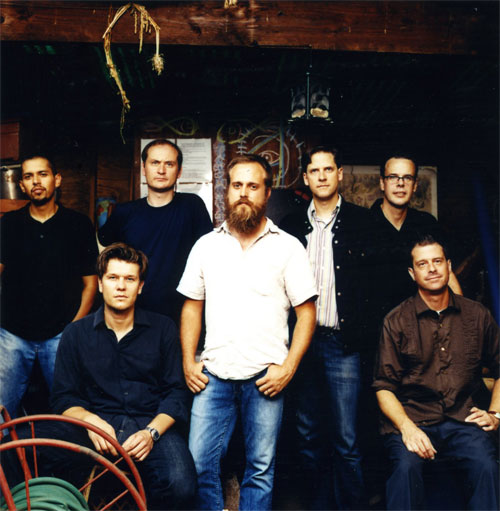 Soon we will climb back into our suitcases for a tour of Japan with our friends Sam and Sarah Beam from the group, Iron and Wine. They will be opening as a duo on the whole tour and gradually will be flanked by members of Calexico performing songs from the EP “In The Reins”. As on tours before in North America and Europe, I am sure there will be a lot of improvising together and coming up with interesting new original and cover songs. Last year Paul Niehaus and myself recorded with Sam at his home studio to contribute to the new Iron and Wine album due to come out later this year.

Touring Japan is always an exciting time. Everything is organized well, the shows are early, crowds are attentive, and after every night there is always a big dinner held where we meet a lot of the local artists and personalities. Last time we played Japan we met cartoonist, Ashura Benimaru, one of the creators of Pokemon who showed us his studio full of books, toys and tons of vintage guitars. We also stopped by the Flat 4 Volkswagen shop and showroom. What an amazing collection of old vintage bugs. beetles and parts. They’re celebrating their 30th year anniversary. Check it out.

The last few times we’ve been to Japan we’ve managed to schedule a day off in Kyoto to visit the countries’ most famous temples and shrines. So this time around I made sure to ask that we return again to Kyoto since for me those experiences there, in what was the
spiritual center, always make a huge impact upon returning home. It was in these minimalist styled gardens and temples where the presence of absence made me feel a connection to living in the Sonoran Desert back home in Arizona. That and reading works by writer Haruki Murakami have been a constant source of
inspiration.
www.harukimurakami.com 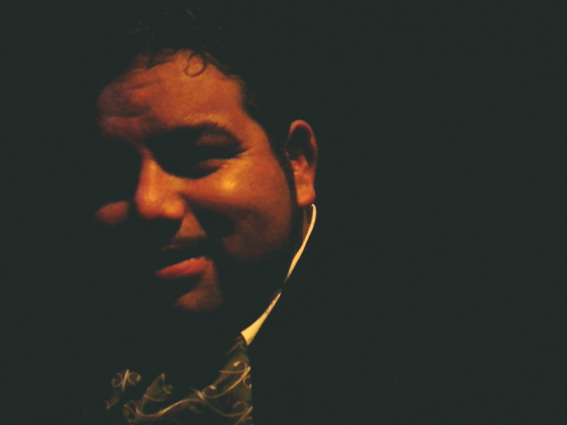 A very special tribute and benefit concert will be held in Tucson on Saturday, January 6th at The Rialto Theatre to honor the memory of mariachi musician Ariel Cramer who passed away unexpectedly in May 2006 leaving behind one child and one newborn he never got to see.

Ariel Cramer came with us to Europe for the first concerts we ever played with Mariachi Luz de Luna in 2000 for the City Slang Records’ 10th Anniversary in London and Berlin. Ariel was also in the music video for the song ‘Crystal Frontier’ and recently played with us at Disney Hall in Los Angeles, together with Luz de Luna and Lila Downs.

Ariel or “El Cramer” as he was nicknamed, was an instantly likeable person. He always came to rehearsals and performances with a huge heart and personality that lit up the room. He played both the guitar and vihuela exceptionally well in several mariachi groups as well as a heavy metal group. Ariel was always cracking jokes and making us all laugh, his presence is thoroughly missed.

Johnny Contreras of Luz de Luna introduced Ariel to Calexico and when we spoke about doing something to both honor the memory of our friend and raise some money for Ariel’s family – we thought there is no better way than through music.

Let’s remember El Cramer. He seemed to be shy and quiet. His appearance expressed GemÃ¼tlichkeit. Cramer would greet me with a peaceful “Wassup”, but then give me a ton of a handshake. Because he had super powers. I once saw him flying â€“ ‘Ariel’ was his name â€“ over a mile high pile of luggage inside of an overpacked tourbus filled up with about 40 Calexicans, Luz de Lunas, Lambchoppers, their bags and cases. “I might be big, but I can mooove”, he said after the stunt and showed us his biceps. The whole bus cheered. That was
London, 2000.

The last time I played with him was the Tucson show around Xmas 2005. We made the deal 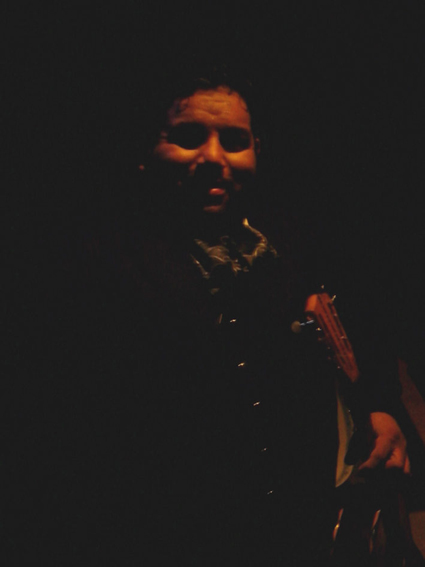 that I had to serve him beer on stage to fight the limelights heat â€“ secretly of course, not for the eyes of the festive audience. We handeld it like Stan and Ollie, as the theater must have witnessed. That particular night he showed his speed-metallist skills on the vihuela. He was a fast ball. The biggest guy with the smallest guitar, the biggest smile and the fastest pace.

Ariel had plans for the future. He talked about teaching kids his music and lessons in life.
I miss Ariel. My thoughts are with you, dear family and friends.

Here is another picture, made minutes before he appeared on stage of the Disney Music Hall in Los Angeles. Not everybody plays this venue. He did.

Tickets are now available for Saturday’s concert which will feature Luca, Calexico, Mariachi Luz de Luna and Mariachi Aztlan de Pueblo High School. All proceeds from the concert will benefit the family of Ariel Cramer

Get them while they last… several new Calexico posters have been added to the store.
All posters are shipped in a sturdy mailing tube. 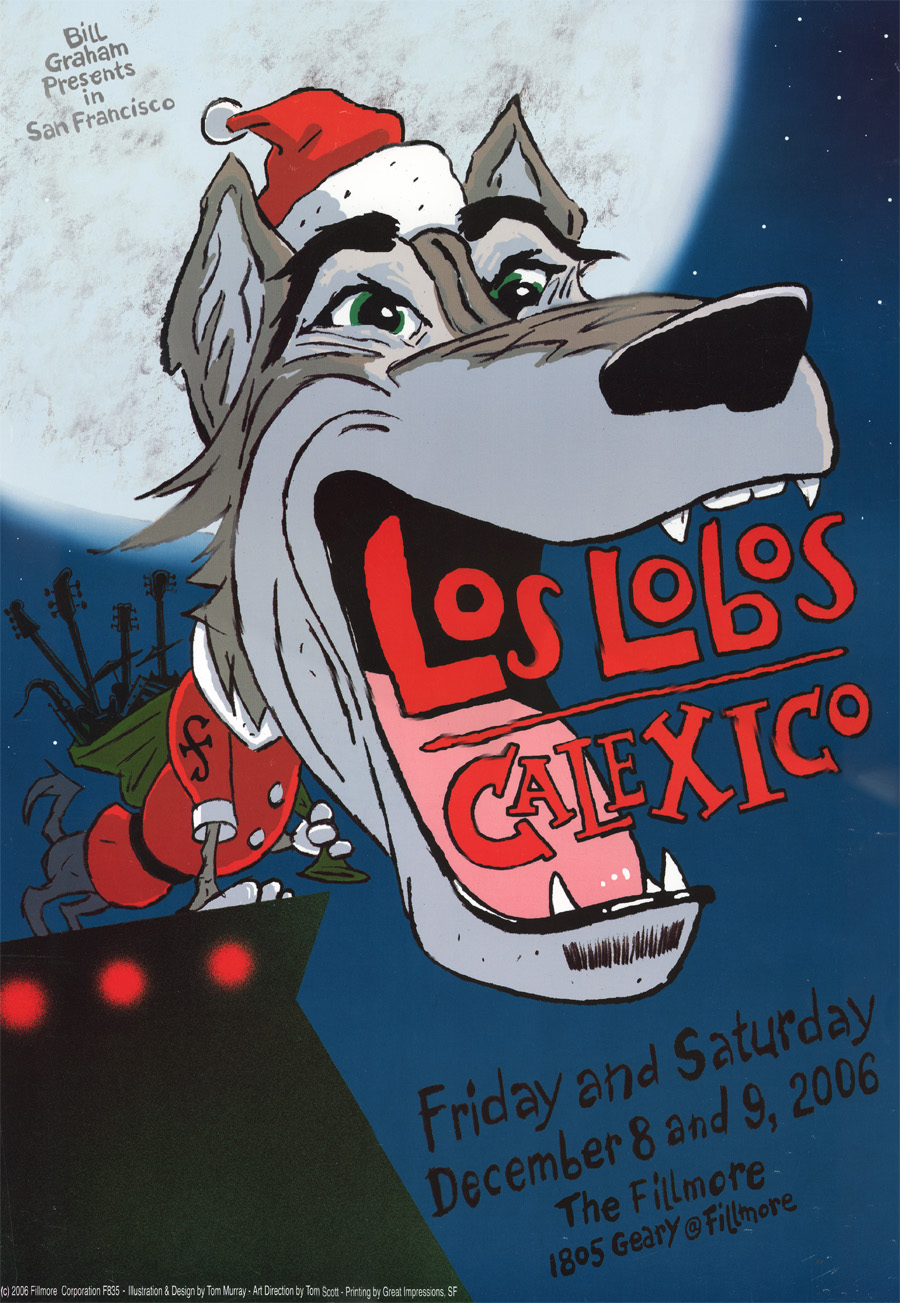 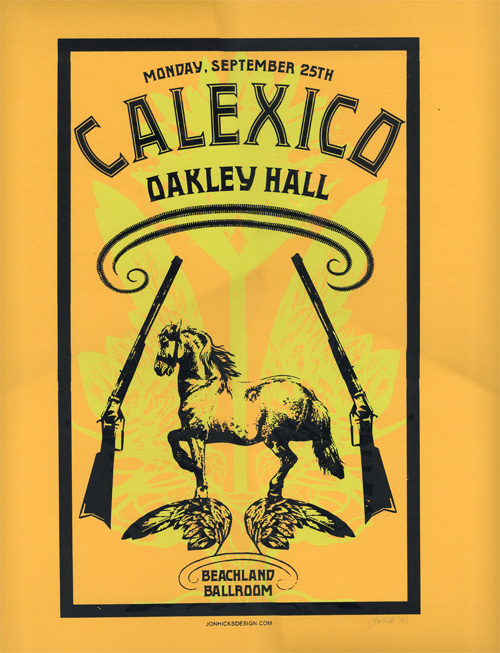 Calexico’s ‘Garden Ruin‘ has been nominated for ‘Americana Album Of The Year’ at PLUG Independent Music Awards – to be held on February 10, 2007 in New York.

PLUG is a collection of music lovers – writers, DJs, webmasters, artists, filmmakers, managers, indie retailers, and most importantly fans – who gather together each year to celebrate the artists who live and flourish in the margins.

You are encouraged to visit PLUG Awards and vote for Calexico! The ballot box is open to every independent music fan with access to the Internet. The Fan vote will continue through January 2007.

Thanks for your support!

The 2007 calendars have arrived!
Featuring traditional Mexican images, each calendar includes all 12 months of 2007 along with saints days and holidays. 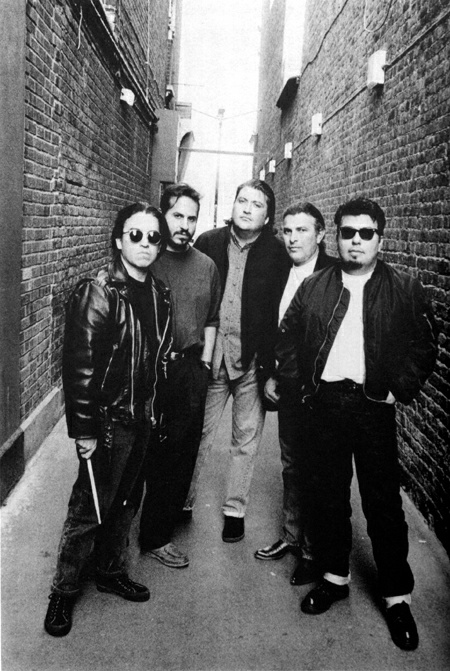 “An inspiration for many years, Los Lobos have more variety and depth than many American bands. Their musical tradition stretches across different styles of music and yet they still carve out their own voice.

They can do anything, and pull it off with soul and style. I’ve seen them play acoustically, juggling instruments within songs, and I’ve seen them rock at festivals like Bonnarroo and Austin City Limits. There’s nothing Los Lobos can’t do.

We are honored to get to play two nights with Los Lobos at San Fransisco’s Fillmore, it seems a fitting place for both bands to meet. The venue’s walls are lined with concert posters from the 60’s until present, embracing rock, jazz, blues, world, folk and experimental music. Both bands in some way tap into a lot of the variety of music that has graced the stage over the years. I know these two nights are going to be equally unique and exciting and wouldn’t be surprised if there were collaborations occuring as well.” 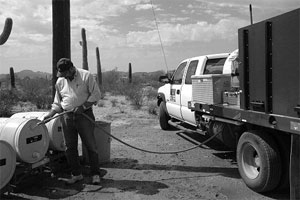 Calexico‘s seven-date December tour broaches some of the most serious social issues facing citizens on either side of the US – Mexico border today. Accompanying them on these dates will be representatives from several organizations including Humane Borders and Music for America raising awareness about humanitarian issues stemming from border and immigration policies.

So, the contest, you ask? What of the contest? Well, we’d like for you to help Calexico spread the news and bring people out to the shows by telling everyone you know about the events. The following is a list of things you can do to help. Every time you complete one of the opportunities from the list, youâ€™ll be entered to win two tickets to the Calexico show nearest you, a copy of World Drifts In (Live at the Barbican) DVD, and a vintage Calexico tour poster. In other words, the more you do, the more likely youâ€™ll be to win.

If you don’t live in any of the cities covered by the tour, don’t worry! You can still enter the contest and participate in spreading the word. See below.

1) Write your local newspaper, radio station and/or television station and tell them about the event. Ask them if they’d be willing to help by publishing an announcement about the event to inform your community. Send a copy of the letter to us at contest@tgrec.com or

2) Repost this bulletin including a personal message to your friends. Then post a comment on our myspace page (myspace.com/tgqs) saying that youâ€™ve done so.

3) Post this message on your personal blog (non-myspace blogs) and send the direct link to contest@tgrec.com . 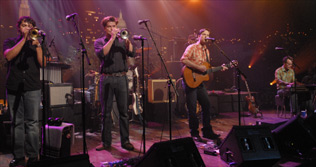 “Two of the underground rock scene’s most creative artists perform. Critical darling and indie rock sensation Sufjan Stevens brings his orchestral folk/pop to the stage in support of his latest album The Avalanche. Highlighting its latest record, Garden Ruin, Arizona’s Calexico dazzles with a unique blend of traditional songcraft and southwestern roots music.”

-from Austin City Limits on PBS.org

After a busy year of touring the States and Europe, Calexico has announced several new tour dates in December to round out the year!

The Tucson show on December 2nd continues Calexico’s annual tradition of throwing a year-end hometown benefit concert. A portion of the proceeds will go to KXCI-FM, a local community sponsored radio station. Proceeds will also go to Humane Borders, who along with other organizations like No More Deaths and Border Angels, offers humanitarian assistance to those in need through more than 70 emergency water stations on and near the U.S.- Mexican border, ultimately trying to quell the hundreds of deaths every year in the Arizona desert due to dehydration.

Calexico has been hailed as a border band, transcending boundaries and genres with their unique blend of US and Latin style. Politically, the band feels just as strongly about the people of the region as they do the sounds. Joey Burns explains; “The issue is a complex one, and now with President Bush signing the bill that would build a massive wall between the two countries, the problems will undoubtedly become more severe and horrifying.”

A representative from Humane Borders will be at all Calexico’s headlining Southwestern shows to answer questions or provide insight into their cause. Also, the tour as a whole will be presented in association with Music for America, an organization connecting concert-goers with social justice organizations and political issues they might not be aware of, both nationally and in their area.

The last two shows on the tour bring Calexico back to the lovely Fillmore Theater in San Francisco, supporting one of their favorite groups, Los Lobos. “They have long been a musical inspiration, covering so many different styles of music, utilizing eclectic instrumentation and providing some of the most memorable concerts. Although we’ve played many festivals together like Bonnaroo and Austin City Limits, this will be the first time that we share the same stage and venue together,” says Burns. “I can’t think of a better way to round out the year than to play two shows with Los Lobos. I am sure that both sets each night will be completely different and who knows what musical collaborations may unfold between the two bands and musical friends from the area.”

For more information on the organizations and issues mentioned above, check out the following links:

Headlining tickets go on sale to the general public October 14th, and tickets for the dates with Los Lobos are already on sale.